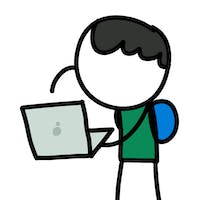 I wanted to extract some text from a webpage. To be specific, I wanted to get anything that's between <h3> tags and save that output into another file.

My idea was to view the source code of that HTML page and save it as a target.txt file and then use Python3 to process it further.

Here's the code that I wrote to test if my idea would work:

I created a list called sentences. Then opened the file, read the contents of it and stored it in the newText variable.

Then the logic was to process the code as long as <h3> existed in newText.

And processing involved, finding the start and end index of the string I wanted to extract, then extracting the string and replacing newText with unprocessed text (i.e. the text that remained from the end of last extracted string).

Therefore unprocessed text would be:

The extracted code is appended to the sentences list.

I learned that I don't have to use the U mode anymore as that's the default in Python3 .

Also, I noticed the strings in the sentences list was a little messy with encoding issues like \xe2\x80\x99s.

The fix for that is to use the encoding parameter as follows:

Now that we have a list of sentences, we can move them to an output file as follows:

I wanted to extract all the idioms from this website to a text file.

That's all in this post. Let me know if you found this valuable. Thanks.